ALWAYS PUT INTO REMEMBRANCE THE PROMISES AND GOODNESS OF GOD 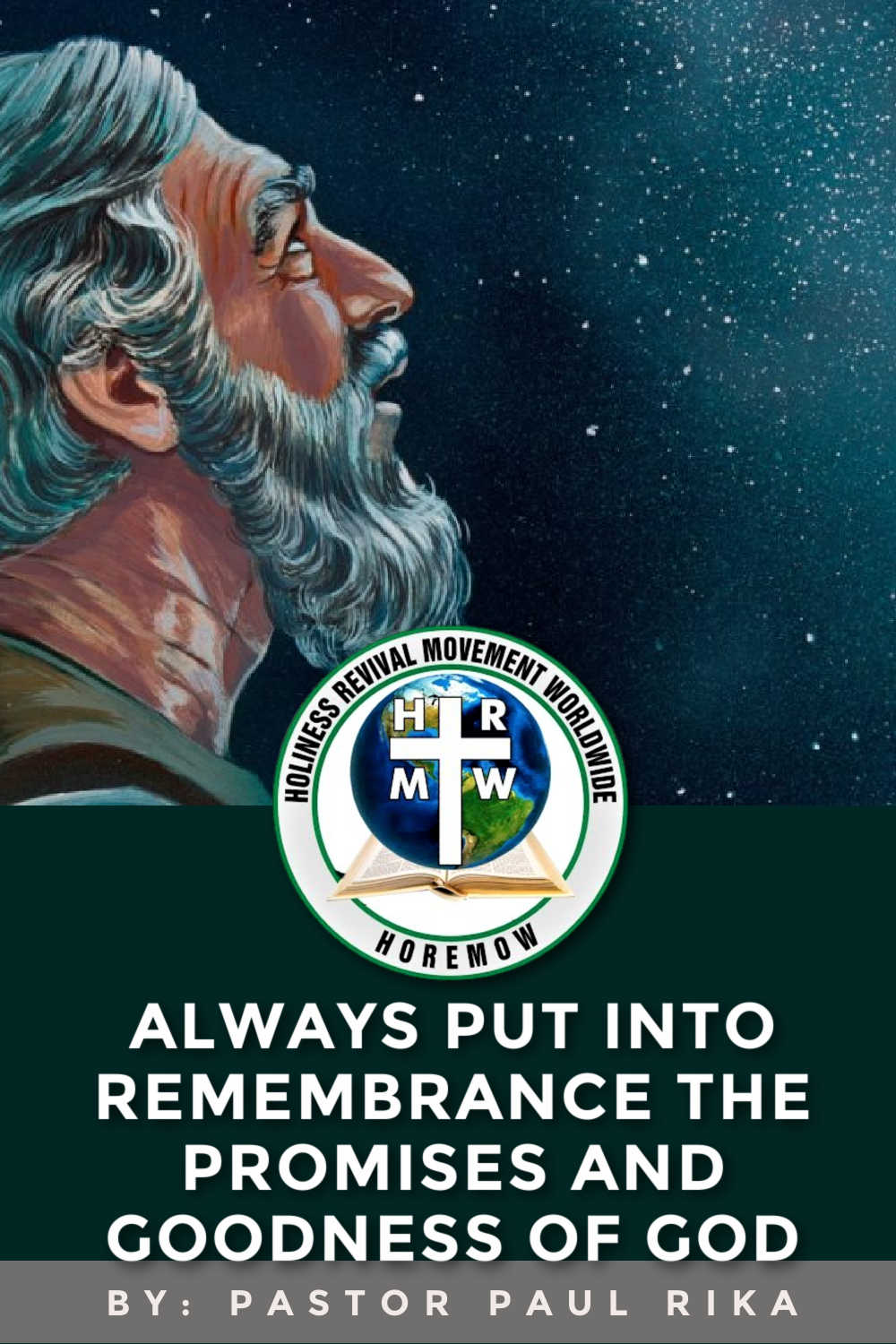 TITLE: ALWAYS PUT INTO REMEMBRANCE THE PROMISES AND GOODNESS OF GOD

​TEXT:  Psalm 106:8-15 KJV
8 Nevertheless he saved them for his name’s sake, that he might make his mighty power to be known.
9 He rebuked the Red sea also, and it was dried up: so he led them through the depths, as through the wilderness.
10 And he saved them from the hand of him that hated them, and redeemed them from the hand of the enemy.
11 And the waters covered their enemies: there was not one of them left.
12 Then believed they his words; they sang his praise.
13 They soon forgat his works; they waited not for his counsel:
14 But lusted exceedingly in the wilderness, and tempted God in the desert.
15 And he gave them their request; but sent leanness into their soul.

Key verse:  Psalm 78:10, 11 They kept not the covenant of God, and refused to walk in his law; And forgat his works, and his wonders that he had shewed them.

​Forgetfulness! Even Israel did this to their hurt as seen in 1 Samuel 12:9 “And when they forgat the LORD their God, he sold them into the hand of Sisera, captain of the host of Hazor, and into the hand of the Philistines, and into the hand of the king of Moab, and they fought against them.” Forgetting the promises of God puts you into the hand of the devil. Forgetting what God has said puts you into fear. Forgetting the dreams that God has given you makes you to have no hope for the future. These people forgot God. Can you imagine that? They forgot the One that brought them out of Egypt; the One that did diverse miracles in the wilderness; the One that gave them the Promised Land; the One that gave them great leaders; they forgot Him completely. When the Lord saw that these people were not looking for Him again; these people were not following Him again; they didn’t even remember all His good works which He had done for them, God too became angry and released the enemies against them.

Psalms 106: 7 “Our fathers understood not thy wonders in Egypt; they remembered not the multitude of thy mercies; but provoked Him at the sea, even at the Red sea”. Can you see? They didn’t remember the goodness of God over them in Egypt. They never remembered the multitudes of His mercies upon them. Do you really remember? There was a time you almost got involved in a terrible accident, you had even closed your eyes and had given up. But how the accident didn’t happen was a mystery and you came out and promised to serve God forever because you recognized that only Him could have delivered you from that accident. Do you remember that fire outbreak? How did you come out of that fire? You told yourself nothing but Jehovah brought you out of it. Do you remember the sickness also? All efforts failed. You went to several hospitals but nothing was working and they had given you over to death. Even you too thought you were going to die. But how did you come out of it? You know it was Jehovah that did it. And you want to forget that God that did so much for you? That is ingratitude!

Thought for the day: Don’t allow today’s adversity to make you forget God.

Song for the day: It pays to serve Jesus I speak from my heart…