DO NOT DESPISE GOD’S REBUKE 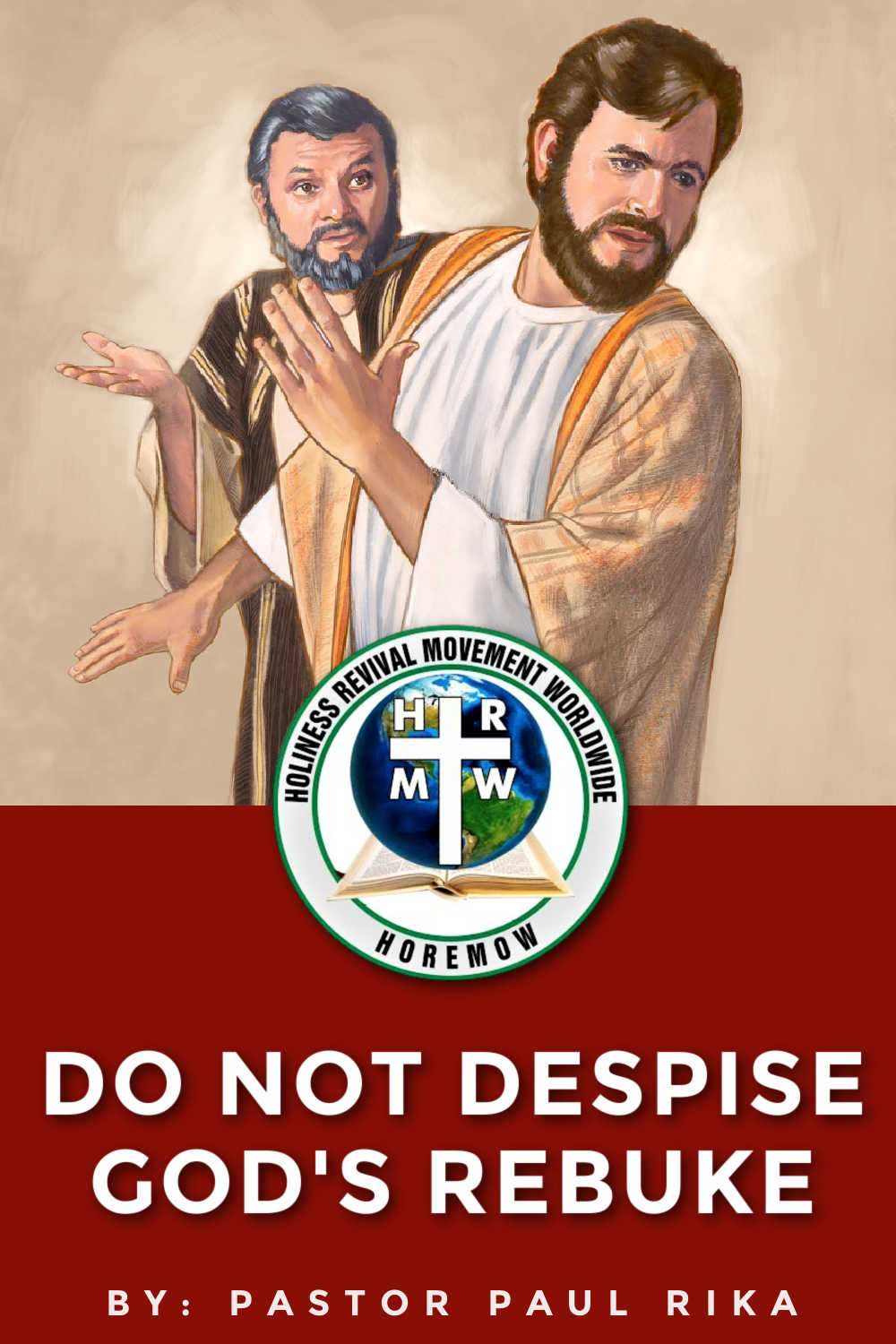 TITLE: DO NOT DESPISE GOD’S REBUKE

TEXT:  Job 5:17-18
17 Behold, happy is the man whom God correcteth: therefore despise not thou the chastening of the Almighty:
18   For he maketh sore, and bindeth up: he woundeth, and his hands make whole.
Key verse: Proverbs 3:11 My son, despise not the chastening of the LORD; neither be weary of his correction.
The word of God is scarce in the world, even among many denominational churches of our day. Yet, this precious thing has come to you so freely and easily in Holiness Revival Movement. Therefore, don’t commonize it. Respect the word of prophecy; respect the word of rebuke; respect the word of correction; respect the reproves of the Lord. “Despise not thou the chastening of the Lord, nor faint when thou art rebuked of him” (Hebrews 12:5). Don’t say you cannot take it. Don’t replicate Cain’s life, who when asked by God, “Where is Abel your brother,”  answered, “Am I my brother’s keeper?” Don’t do that! Don’t say you don’t want to hear. Don’t say they are disturbing you. Please don’t join the people that do that, nor faint, nor give up, nor turn away. Don’t say they have embarrassed you so you are leaving. Where are you leaving for? The God that embarrasses you is the everlasting God; now that you want to leave, where are you going? You can only leave for hell. So don’t faint; don’t give up. Does it even mean anything if your name came up in a revelation made public? Those who are in hell now wish they had called their names when they were alive. That would have brought them to their senses. But when their sin was covered, what was the result?

Bible says in Proverbs 28:13, “He that covereth his sins shall not prosper.” They don’t prosper in places where they cover the names of offenders. That verse continues thus: “but he that confeseth and forsaketh them shall have mercy.” There are times when we need to call your name if the Lord says so. How much more when the Lord reveals it in a revelation? If you are bigger than that, it means you are not a member of this Ministry. “Nor faint when thou art rebuked of Him. For whom the Lord loveth, He chasteneth.” It is love! Have we not heard of many that got to hear these things you are hearing here in other places and they were disappointed and sent to hell? Even highly placed and celebrated ministers in the Christian community! Would it not have been better if their sins had been revealed on earth before they died so that they could escape hell? Would it not have been better than what we are now hearing about them in the world beyond? Well, the Lord knows what He did with them and how they resisted His correction in love. Don’t be like them.

Thought for the day: God rebukes those he loves. Receive godly rebuke with gratitude.