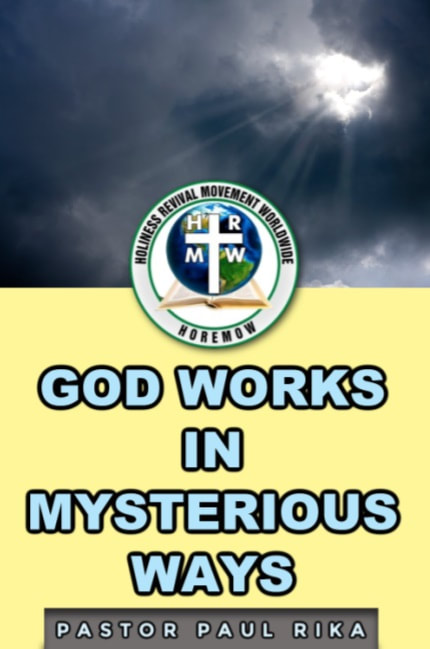 TEXT: RUTH 4: 13-17
(13) So Boaz took Ruth, and she was his wife: and when he went in unto her, the Lord gave her conception, and she bare a son.
(14) And the women said unto Naomi, Blessed be the Lord, which hath not left thee this day without a kinsman, that his name may be famous in Israel.
(15) And he shall be unto thee a restorer of thy life, and a nourisher of thine old age: for thy daughter in law, which loveth thee, which is better to thee than seven sons, hath born him.
(16) And Naomi took the child, and laid it in her bosom, and became nurse unto it.
(17) And the women her neighbours gave it a name, saying, There is a son born to Naomi; and they called his name Obed: he is the father of Jesse, the father of David.

KEY VERSE: RUTH 4:13
So Boaz took Ruth, and she was his wife: and when he went in unto her, the Lord gave her conception, and she bare a son.

God works in mysterious ways to perform His wonders. Why don’t you sit still and let God connect things to work out a life partner for you? Even if you decide not to marry again, allow God to work out a future for your life.  God will work out satisfaction for your life. Do not run up and down nor make a carnal show of yourself. The process of Ruth’s marriage and childbearing was holy and pure. That woman had married before but had no child with her husband.

It is a Divine plan; else how could two brothers marry two separate women and both families had no child? How could Elimelech go to Moab and die there along with his two sons? The hand of God is in this matter. Ruth eventually got married to Boaz.
Boaz applied godly wisdom and diligently followed scriptural provisions in the marriage process. He presented the property of Naomi’s late husband, Elimelech to the nearest kinsman saying, “Can you redeem the field of Elimelech? He accepted, “Yes I will.” “If you buy the field, be ready to take Ruth also and raise up children for Mahlon, the late husband.” He refused. “No. I don’t want to mar my own inheritance and mix up my children.” Short-sighted man! You don’t want to mix up your children with Jesus? You don’t want to mix up your children with King David and King Solomon? You have not understood. Boaz said, “Ok, I will redeem the field and take over Ruth.” The elders blessed him. “God shall give you great children of this woman.” Boaz married Ruth and the Lord gave her conception. God of time that withheld the conception then now gave her conception and she bore a son.