HOW JESUS MINISTERS ON PULPIT THROUGH PASTOR PAUL RIKA – Part 3 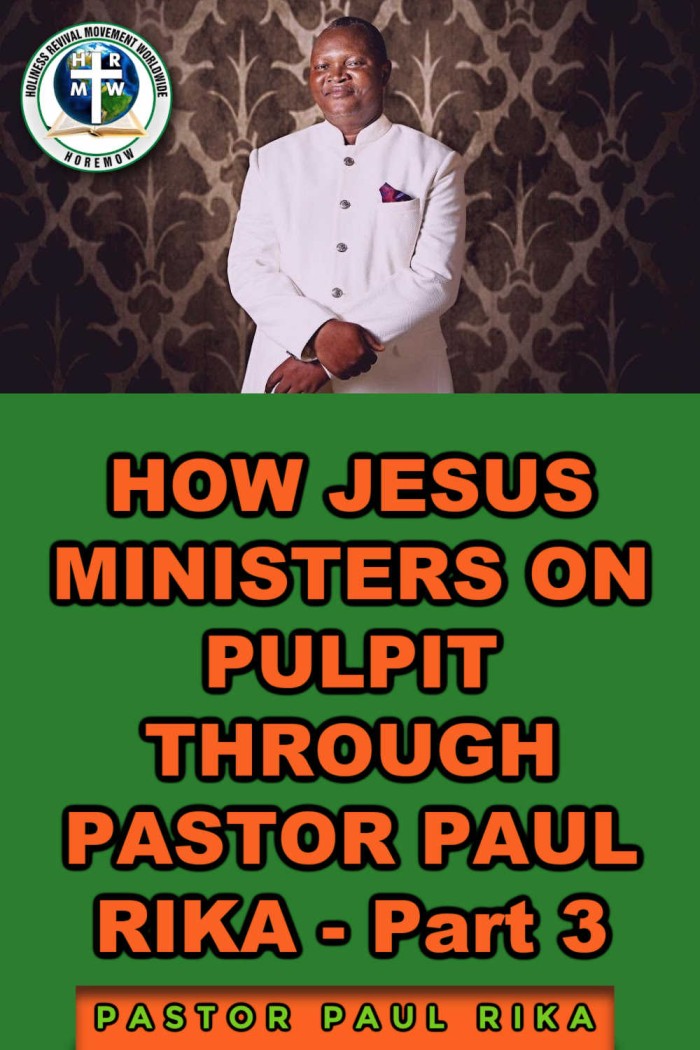 TEXT: PSALM 104: 1-4
(1) Bless the Lord, O my soul. O Lord my God, thou art very great; thou art clothed with honour and majesty.
(2) Who coverest thyself with light as with a garment: who stretchest out the heavens like a curtain:
(3) Who layeth the beams of his chambers in the waters: who maketh the clouds his chariot: who walketh upon the wings of the wind:
(4) Who maketh his angels spirits; his ministers a flaming fire:

KEY VERSE:  PSALM 104:4
Who maketh his angels spirits; his ministers a flaming fire:

Continuation of Revelation to Brother Ezi Monday:
The Lord turned to me and said, “Come. People have doubts over Pastor Paul Rika and think he is the one speaking to you not knowing that I am the One preaching through him. Come let Me show you how I use Paul Rika.” I now followed Him to the hall. The Coordinators were seated by the right side of the hall, the choir sat by the left side and the congregation was seated also. So, He said, “I will show you how I use Pastor Rika.” I saw Pastor Rika seated at his seat by the altar. The Lord Jesus Christ now moved close to him and removed his flesh as someone removing clothes and made him appear as two.

I could see double Pastor Rika, but the other one was mere fleshly covering. The main Pastor Rika now sat quietly like a small child asked to sit quietly and not to move! The Lord now moved to the altar and pulled the other Pastor Rika flesh upon Himself so that the people were seeing Pastor Paul Rika but not knowing that it was actually the Lord Jesus Christ addressing them using Pastor Rika’s flesh, face and voice. He now started preaching and moving His hands as Pastor Rika use to do while preaching. He now asked me, “Who is preaching?” I said, “Pastor Rika.” He said, “Am I Pastor Rika?” I said, “No it is You, Lord.”

The Lord said, “You people think it is Pastor Paul Rika speaking to you, not knowing that it is I, the Lord Jesus using his flesh as a vessel to speak to you. When I speak, you play with it, thinking it is an ordinary man talking to you. If you refuse to hearken to My word and think it is Pastor Rika you disobey, I will judge you.” He said these words with tears. In fact, all through that revelation He cried profusely and shed tears. “You think it is a man sending you to go and invite others. See the handbills wasted here. You will not go out as you are sent to do. See unserious people that will not be serious with My work.”

THOUGHT FOR THE DAY: The Lord uses Pastor Paul Rika as His chosen vessel.