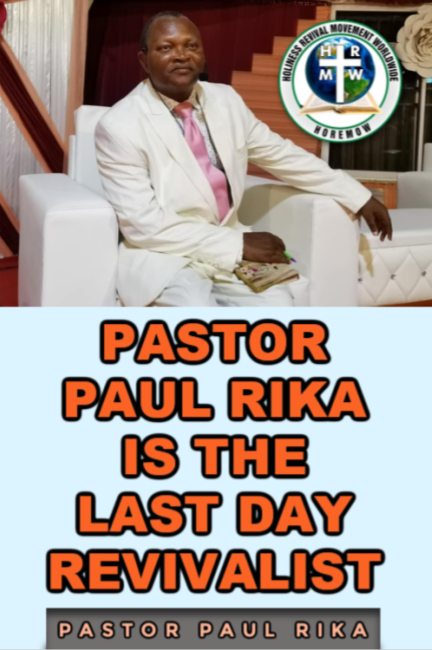 KEY VERSE: 2 CORINTHIANS 11: 31
The God and Father of our Lord Jesus Christ, which is blessed for evermore, knoweth that I lie not.

Continuation of the Angelic Message:
My wife, Sister Linda Paul Rika said, “I started hearing the voice of the Lord saying, the people you are going to be leader over are older and senior to you both in the faith and in the ministry. For men not to challenge God for choosing a younger person to lead them, I have decided to run you through this way and these things, so that they can see your credentials in knowledge, wisdom, works and suffering. They will see despite the persecutions and sufferings you received for My gospel; you continued My work steadfastly.

This is because God has given you the mandate. You are the last day revivalist to bring salvation to the world. I the Lord have been going around the world to advertise you. Don’t see these things they are saying against you to be as though the Lord has an accusation against you. No! They are for your good. See them in the light of Apostle Paul in the scriptures.

If the Lord, the Creator chose that I should follow that way, should I say no? He has organized it by Himself, even without my asking, and said, “This is the way I have chosen for you to go through.” I have also seen other things the Lord has done in the impartation of knowledge and wisdom, in the writing of books and messages, in bringing doctrines that are buried in Christianity and making them very clear for humanity to know it. In all the things that the Lord is doing truly, the Lord has the reason why He is passing me through this way as He said.

THOUGHT FOR THE DAY: Pastor Paul Rika is the last day Revivalist.

SONG FOR THE DAY: Lord send another Elijah to bring Thy power down, send…